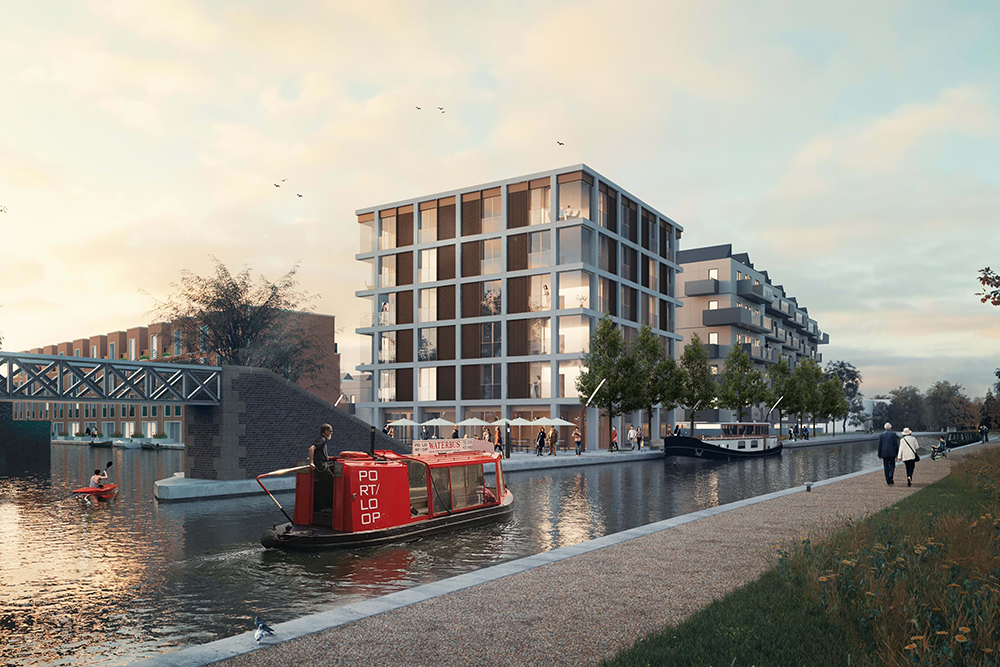 The first phase of the Icknield Port Loop scheme in Birmingham is underway with the arrival of the first modular properties at the development.

The half-mile canal loop is within walking distance of the city centre and will provide a mix of 77 modular, factory built and traditionally constructed homes on this large brownfield site.

Homes England agreed a £7.45million loan from the government’s Home Building Fund for the development by Urban Splash and Places for People. The longstanding venture between the two regeneration companies encompasses plans for more than 3000 homes and will deliver phase 1 at Port Loop.

The scheme will see the development of 1,150 new homes along with commercial property and community facilities across the 43-acre site.

This first phase will include a new park, improved canal towpath and 77 homes built around shared gardens. In addition to the 37 traditionally built properties, there will be 40 modular homes, which can be customised by customers.

Once constructed, the homes will be craned into place on site, minimising construction time on site and speeding up the build process.

Adam Willetts, speaking on behalf of the partnership, said: “Port Loop is one of the most exciting regeneration developments in the country and we are delighted to be delivering the first of many homes there.

“We are also on site creating new public realm space in the form of a one-acre park, as well as progressing our plans for the broader area. We are delighted to receive the support of Homes England for our plans.”

Places for People and Urban Splash are working in partnership with the original landowners, Birmingham City Council and Canal & Rivers Trust on the wider scheme.

The Communities Secretary, Rt Hon James Brokenshire MP, added: “This government is committed to making the dream of home ownership a reality for a new generation as we power through to delivering 300,000 homes a year by the mid-2020s.

“Birmingham’s Port Loop is a great example of how our £4.5 billion Home Building Fund is helping to meet the triple challenge of delivering more, better, faster home construction, as well as revving a strong and prosperous Midlands engine.”

Ian Martin, head of investment in the Midlands for Homes England, said: “The sheer scale of the scheme provides the opportunity to build a whole new community and will be one of the largest regeneration schemes in the Midlands.

“This will provide a much needed boost to the region’s housing stock, which is exactly what the Home Building Fund was established to do.”